All posts published in June 2018

Life sure loves to throw a 180 turnaround don’t it?

If you hadn’t heard, I am to be going out on tour this summer. Opening for a significantly bigger artist. 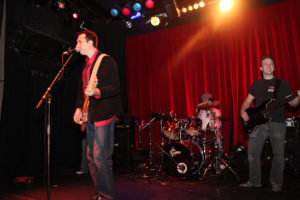 The unfortunate part is…

Said act has disappeared into the ether, so plans have to be changed. I’m currently doing a zag when I was supposed to be doing a zig right now.

See, I was anticipating being homeless for a good portion of 2018 and on into 2019. I mean that in a great way. The plan was to be out on tour for 18 months, initially kicked off with the aforementioned artist. Its not a state secret that it takes roughly 18 months straight of touring in order for an artist to gain critical mass.

Band members were given setlist choices and had voted on their favs.

Based on the scheduling that was planned for, I should have been in Los Angeles now starting several weeks of rehearsals. To make sure the show was as tight as can be and to work out all the parts for everyone.

Said artist had requested that we were to be in the city of the first date of the tour a week early so that rehearsals could be done with their crew to work out the sound and the transitions between my crew and their crew. Smart thinking if you ask me.

The drag is, I hate talking about projects before contracts are signed. This business is so erratic that its impossible to judge what is going to happen. We were to get the contracts for the tour in early February. Which meant we had a deadline for getting things in place in order to be ready to sign said contracts.

In a 180 turnaround, there was a desire to make a soft announcement about the tour to companies that I have endorsements with. Which is ideal at the winter NAMM show that takes place in late January.

I felt pretty darn secure in that my camp had gotten everything that was requested of us for the tour a week prior to NAMM. It didn’t hurt that there was a lot of communication happening between our respective camps. Thus I started leaking the tour plans to my endorsors. Introducing band members to them and helping band members to get endorsements with other companies that more directly related to their instrument.

Part of leaking the tour plan was to talk about how I was planning on doing the sound setup. A 180 turnaround from how its normally done.

All band members, apart from the drummer, had agreed to use a laptop and an audio interface as their sound source for their guitar sounds and vocals. This was a great selling point for several companies I have endorsements with. Most bands don’t do this. Consistency of sound and ease of setup for soundcheck is the primary reason. It really reduces the sound person’s job to mostly dealing with the drum levels, as that would be the most inconsistent source of sound.

With the rest of us going direct and using in-ear monitors it reduces a ton of the guesswork of sound. The guitar, bass, and vocal rigs would remain the same with very minor tweaks needed for levels and PA eq. That’s the beauty of the computer setups.

I found a fantastic company to make a rack setup to house the computers and audio interfaces. Which would have made setup a breeze. Especially since we’d all be wireless. Pretty much plug in the power. Plug in the midi switchers (my custom HIVE) for switching sounds for songs. Then plug in the output of the band to the board. No mics on instruments to mess with, other than the drums.

It started 180 turnaround about a month ago. I began reaching out to other contacts to find another tour to hop on. I felt like something was wrong when the communication tapered off from the artist’s camp. That’s when I was asked to make a list of a bunch of other bands I felt would be a good fit.

Then while in the middle of a writing session for another musical project I got a phone call from the point person putting everything together.

The first thing I was told was that the agent who was dealing with the extra dates, between the weekend dates with the artist I was to open for, the press and radio stuff – decided he was going to quit music. BOMB Drop…

Next up was the announcement that the person putting all the other moving parts together decided to also get out of the music business and become a preacher. BOMB Drop 2.

One of the main contacts I had reached out to find other bands came back saying: I can’t find anyone else who is doing an actual tour. Everyone is doing one-off dates. BOMB Drop 3.

A few days ago I started informing people that I had told at NAMM that the tour had gone into the ether.

The beauty is that everyone in the music industry can relate on some level. The pouring of support that I got back from people was certain uplifting. So many providing words of encouragement and some sending similar stories of things that have happened to them.

After the 2nd round of emails that I sent letting out what had happened, I got a call from an unlikely source who had contact with someone that had a cursory role before. Its a little early to tell but I’m encouraged about the initial contact.

As an artist I’m really opposed to the idea of censorship, especially in music.

Recently there’s been a backlash against certain artists and styles of music. Actually there’s probably always been a backlash or at least groups of people wanting to prevent others from hearing music. The simple word for it is censorship. If music history memory serves me, there was a severe backlash by Christians against the music of artists like Buddy Holly and also Elvis. The humor of that is Buddy came from a religious family (unless I’ve been misinformed).

Then in the 80’s there was the PMRC that used a censorship tactic to ban music thru the use of the government and silly stickers on physical releases.

This might be a first. There are police departments in the U.K. that are asking YouTube to forcibly remove music videos with violent lyrics. I don’t condone it, but I can understand the reasoning. Apparently these artists use the platform to tell rival artists what they plan on doing to them, when, and where. Think of it as a public musical version of the Firms that fight at Football / Soccer matches.

That’s an interesting line to be drawing. On the one hand, if its legit musical expression, it shouldn’t be subject to censorship.

On the other hand, if its gang messages disguised as music, then it constitutes as actual threats, hate speech and violence. That presents a problem. Might be reasonable to apply censorship to that.

This style of music is becoming known as Drill Music. Its new to my radar and I’m not gonna sit here and explain it like I’m well versed in it. I’m interested in videoing my first listen to a popular Drill Music video and taping my reaction, much like how the Lost In Vegas boys would do it. Enjoy as its my first reaction video.

Even in the early days of rap, which is the parent of Drill, there were rap battles. East coast, West coast blasts that apparently led to the deaths of Tupac and Biggie and likely others. At that point there was also a strong musical resistance that expressed life on the streets in the dark parts of major cities. Music was a great way to resonate that harsh reality.

Drill music isn’t the first style to have a censorship request from law enforcement agencies. I’m specifically referencing N.W.A. as a group that got hit with warnings from the law, amongst others like Ice-T, KRS-One.

As you can see/hear, I’m kinda clueless to the U.K. brand of street music with lyrics like this. But I can certainly imbibe the vibe that they’re laying down, musically speaking.