All posts tagged with: southern california

Ah yeah, when I’m in the studio and I’m cooped up for too long, I need to get outside. Such was the case while I was in the studio during the recording of Touch. I needed a break and what better break is there than to get outside and do some light grade mountain biking. Here in this video I’m out in the Pacific Palisades area taking a quick ride up the Westridge trail with my good friend Russell Bowman and his dog Tara. 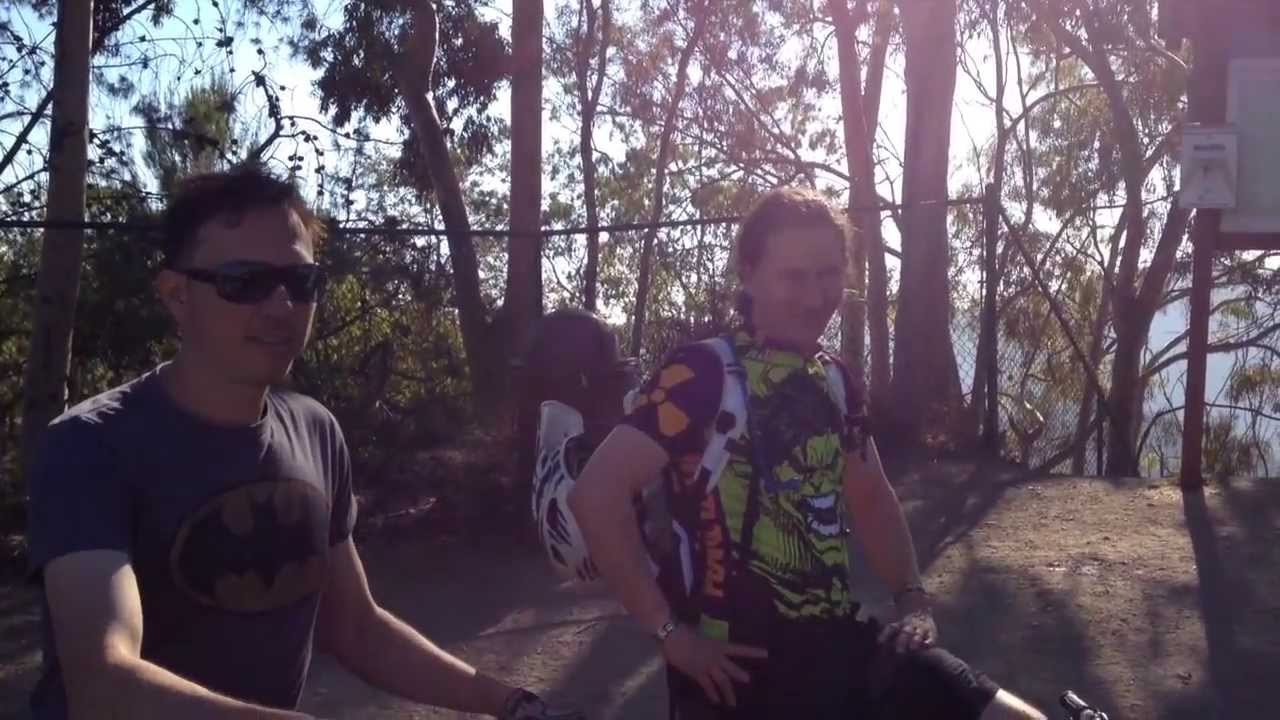 You’re part of this too, but yeah, wait your turn. You need to stop barking right now so I can speak.

I’m here in the lovely area of (is this West Ridge?) (West Ridge)

We’re in Westridge this is Russell Bowman and he owns Thunderbolt Spiritual books. He has loaned me his mountain bike.

Normally I’d be on my own. But, mine is somewhere else in the world at the moment.

A slow uphill climb up Westridge.

Need a little seat adjustment. We don’t have the tools.

So one of the last times I was riding here with Russell I came down into this ditch.

And face planted. When my bike stopped dead in the ditch.

Downhill here. Unfortunately, Russell’s seat clamp has broken so we can’t make it up to our goal which is that little silo looking thing up there on the top of the hill.

We’re going to turn around here in just a moment and go up the single track ‘n’ go back down.

We are, on our way up the Westridge single trail. Russell has got his helmet on I’m solo without helmet. Silly me for being unprepared. But. That’s what you get when you borrow. See ya on the flip side on the bottom.

Russell has to walk ’cause his seat don’t work.

Made it up that. I’m breathing a little bit heavier than I thought I would. But that was exciting.

Next set of downhill we go.

Came down that single track in the center.

Coming back up the hill. Over here Los Angeles covered by clouds. Looks like yesterday when golfing.

Now back down to the end.

Russell and Tara up ahead. As they say – never let ’em see ya sweat.

Touch In The Studio

Come in the studio with me as I work with George Leger III at his Utopia Parkway studio to record the final vocals on my upcoming new single “Touch”. Get a sneak peek of what it’s like in the studio and working with a good friend from Canada who helps create some awesome magic.

Find out who I got one of the guitars used on the song from. Figure out a particular guitar riff I play while waiting for George. Hint, it’s from an amazing guitarist out of Texas. 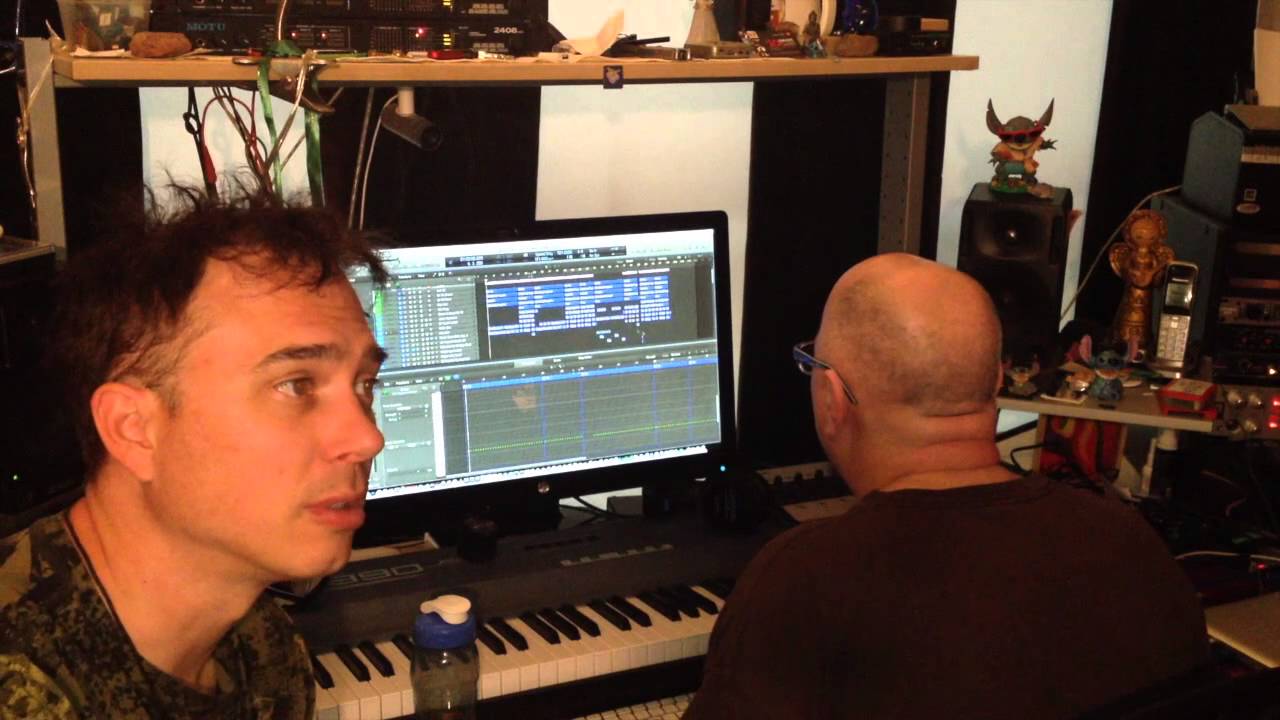 Transcript:
We’re in Los Angeles. Taking off in a moment in the car. To get over to the studio. Time to start recording some vocals.
Ok, here’s the humor. I’ve just rolled up to the parking lot of the studio where I’m recording with George Leger, over here, the third. He’s got sore feet. So, we’re walking in. About to get started with doing some recording and having some fun. Of course I’ve got to have some tea before I start yodeling out of my mouth. [yodel yodel] But it will be an awesome day of having fun in the studio. Enjoy. See you soon.
Currently we’re working through some issues that George has with playing the mix back, before we get into the concept of me actually opening my mouth and making some more vocals. That are not just demo vocals.
Bonus points to YouTubers who can figure out where that riff comes from.
We got the mics all set up and what we’re gonna do is we’re gonna test out this particular setup to make sure it sounds, fucking brilliant. [fucking brilliant].
Turn back the click on?
Don’t you love that? That’s George’s dyslexia in action, right there.
That’s Canadian speak isn’t it?
Canadian speak, ha ha ha.
Eh?
Just for those out in YouTube land. This is a Parker Fly guitar.
Yes, very nice guitar. Wish I had one actually.
It was given to me by somebody that is very big in the independent music world. Or at least was at one point in time. He’s now kind of retired. His name is Mr. Derek Sivers.
Derek Sivers, thank you very much for your contribution to this song. That we’re using with your Parker Fly, that is, well apparently it’s now my Parker Fly.
We’re doing a little production work at this point. We’ve decided to nix the pre chorus, which you’ve already found out. And we’ve decided to nix some vocals in the chorus there were, uh, filling too many holes. After we do a bit more production work, we’re going to ad some ad libbers. Ad libbies. No? We’re not, we’re not doing any? Oh, cause there’s not enough holes. Not enough room. So much for ad libs.
You know what they say about ad libs? Fuck ad libs.
You say you want to try another octave higher. I’m not sure that’ll be overkill, but I’m certainly willing to try.
Well then, shall I double the other choruses first?
Ah, no. I’m just going to use this part for all of them.
No, no, no.
Yes, yes, yes.
No, no, no.
Yes, yes, yes.
I don’t like cut and paste.
Dude. I don’t care. This is not really that important.
It is.
fuckin prima donnas.
I don’t feel like a prima donna, but thank you.
You’re a fucking leo, what are you talking about.
That doesn’t make me a prima donna.
Yes it does.
No, it just makes me king of the jungle. Or my jungle anyway.
It has been an awesome trip. The vocals are done. It’s time to do the mix. Back to the studio. So long LA, it’s been fun being back. It feels like a slice of home. See ya on the flip side.
Read More